At last there are signs of the sun and at the time of writing a watery spring has arrived.  It is time for Spring cleaning and replanting of the garden.

You will now be enjoying the new growth and flowers. I thank everyone who came to our recent fundraising play. We value your support. It was an enjoyable event showing it is never too late for love. My thanks to the Friends Committee for making this happen. 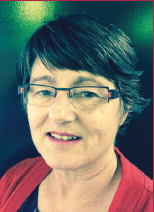 Please share our newsletter and help recruit someone new to the friends of the Hope Foundation.

What better time to think about your future whether you are young or old ….

Here is some practical information about the New Zealand law that can help you protect you and your family in these situations.

These are written from the perspective of a geriatrician who has witnessed many families struggling with trying to determine what their loved one would have wanted.

What is the PPP&R Act for?

To provide for the protection and promotion of the personal and property rights of people who are not fully able to manage their own affairs. This act also allows you to prepare ahead for your future in case of illnesses such as stroke, dementia or serious head injuries.

What are the underlying Principles?

Who is the PPP&R Act for?

New Zealand Residents who are over the age of 16.

People who are competent can set up an Enduring Power of Attorney (EPA) for personal care and welfare, and property.

All adults should consider making an Enduring Power of Attorney at the same time a Will is drawn up. None of us can predict the future and this helps protect you if you are unable to make a decision for yourself. This makes it much easier for your family and helps protect them too.

To protect yourself you need to choose your attorneys wisely.

Do you trust them to make decisions in YOUR interests? Have you discussed your wishes and preferences with your attorneys so if they do have to act for you will they know what to do? Do you know you can write down some directions at the time you make your Enduring Power of Attorney?

Too often no directions are given in the document. This can lead to conflict within families when the attorney makes a decision the family disagree but there is no guidance from you!

Another way to give your family or Attorney guidance is to set up an advance care plan. Give a copy to your Power of Attorney and your doctor http://www.advancecareplanning.org.nz/

This website has several really helpful documents to guide you through this discussion with your family. This is really important. Consider this your Christmas gift to your family. Get all the adults in your family to join the conversation and find out what matters to them. As a Geriatrician I deal with consequences of people not planning ahead on daily basis. This means opportunities to meet your wishes are not clear, families are stressed and the cost of going to Court high.

Remember, illegal requests cannot be honoured! Guidance must be practical. Beware of making promises that cannot be kept. A promise to always look after you at home becomes a mighty burden if your carer is extremely unwell or you are completely bedbound requiring 24-hour nursing.

The Family Court Directions need to be carefully read and conditions followed.

Friends of the Hope Foundation

The Friends of The HOPE Foundation Committee welcome Rose Caughey as a new member of the team. Rose brings skills of event management and a large amount of creativity and fun.

Her interests are supporting worthwhile causes while continuing to run her own business. We are pleased that she decided to support The HOPE Foundation and become an active member of the Friends Committee.

As the year is fast coming to an end, we wish to thank each person that has supported the Friends’ fundraising events. A most successful and uplifting concert was held in the fascinating home of Sir James Wallace on the 1st of May.

Our professional musicians, Raewyn Winter, on flute, James Donaldson, cello and Sherry Grant piano and cello treated the audience to an evening of lively and inspiring music. No one went away disappointed.

Later in the year, the Dolphin theatre was the venue for another fundraising play. All the funds raised have contributed to making the life of a scholar a little easier while researching an aspect of ageing. We value your support.

An interview with Joan-Mary Longcroft, QSM 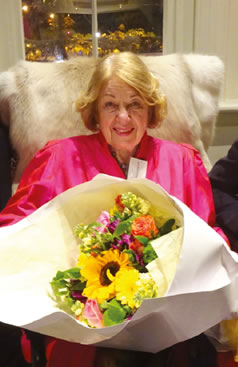 Joan-Mary Longcroft was appointed inaugural Chair of the HOPE Foundation’s Friends Committee in 2005 and became a full member of the Foundation’s Board in 2006. She proved to be an inspirational leader. Nothing was too much trouble. She had an optimist’s view of life and a huge network of influential friends on whom she could depend for assistance with various projects.

She also had years of experience at executive level in not-for-profit charitable organisations as well as in the business world. She retired from the Chair in 2009 but remains closely in touch. She proved to be an ideal appointee to a position that didn’t actually exist until she got it up and running.

Prof. David Richmond, Founder and past Chairman of the HOPE Foundation for Research in Ageing, recently interviewed her in her home.

Joan-Mary recalls being approached about possibly taking an interest in the voluntary position and organising a support committee by long-time friend Janice Bowman. Jan had been appointed Executive Officer of the Foundation some 18 months previous. Their acquaintance stemmed from a lengthy involvement in Zonta International.

Joan-Mary had been a charter member of the Zonta club in Auckland when it was established in the mid 1960s. Although not having any initial intention of joining, she eventually did. She rose through the ranks to the position of Area 3 Director (1988 – 90), District Governor for New Zealand (1992 -94) and then Director of Zonta International Foundation, Chicago (1994 -98). Jan held the role of District Governor after Joan-Mary. Joan-Mary says that “overall, my community and international roles have stemmed from networking through Zonta International.”

Joan Mary was interested in the purposes of the HOPE Foundation. She agreed that there was a need to boost quality research on ageing. Her only concern about the proposed new appointment was that she knew nothing about medical science. She was greatly relieved when Jan assured her that that would not be a problem.

Jan explained that she would like to see a group established that would have as its objectives assisting with fund-raising, promoting the Foundation thus increasing its public profile, and making the HOPE’s supporters feel themselves to be part of a HOPE ‘family’.

These objectives appealed to Joan-Mary. She had learned a lot about life in her 80+ years and sought to incorporate what she had learned into her own approach to life. The value of hospitality had become clear to her. “People may join causes by persuasion but personal choice is better. Hospitality enhances fundraising as members and friends enjoy one another’s company, sharing their knowledge and socializing. And so both the organisation and the community are rewarded,” she explained. She was no stranger to fund-raising having in earlier times spent years on the Council of the Navy League that had a domestic committee “flat out on fund- raising” for the benefit of Sea Cadets. In addition she was for 10 years President of the Royal Commonwealth Society whose motto is ‘peace through understanding,’ and six years national Secretary of SPELD. In respect of the latter organisation, part of her responsibility was to arrange visits and lecture tours by overseas experts.

To the HOPE Board’s delight, Joan –Mary accepted the challenge “in the twilight of my service to the community,” and set about calling a committee of her friends together. 10 years later, some remain on the Committee. Joan Mary and Jan felt it was important to launch the Friends Committee in a blaze of publicity. This was achieved at Government House, Auckland in November 2005, hosted by the Governor General, Dame Sylvia Cartwright. Some 110 friends accepted the invitation to what turned out to be a very successful promotional evening.

There followed four productive years. The Committee developed an index of regular contributors to the Foundation. It invited them to a regular end-of-year function with the Board.

Who could ever forget the late Les Andrews’ spontaneous solo act at one of these? It began an initiative with the Howick Little Theatre to organise a mid-winter play usually with a theme of ageing as a fund-raiser. Scrumptious finger food prepared by Committee members was available prior to the performance and in the interval. Joan Mary’s reputation as a sandwich maker par excellence was quickly enhanced. Joan-Mary introduced the idea of making an allocation of a minimum of four tickets to HOPE Board members to sell to friends.

Joan-Mary says that she always believed strongly in planning for succession of leadership. “New leaders bring in new ideas, influences, connections and energy.” Carolyn Ward who took over as Chair of the Friends on Joan-Mary’s retirement brought all that to the table and more, as has her successor, Karen Anderson-Yates.

A final word from Joan-Mary. “It wasn’t my purpose when I joined the Friends Committee of the HOPE Foundation to entertain everyone – that wasn’t what was required. I recognised that I needed to discuss with the Board how to combine fund-raising with offering our members something of a social nature. It seemed to be a novel idea to some of them. My idea was that people don’t join the Foundation as donors to come to events, but that if we offered quality events as fund-raisers, donors who attended would have a really enjoyable experience. I think we have got that balance fairly well sorted. I am immensely grateful to my friends who supported the Committee over the years. You can only do so much as you get older and you need to recognise that your friends can only put up with so much too.”

Accessible transport and mobility in an Age- and Disability-friendly community

With an aging population in New Zealand, transport accessibility for older people, in particular public transport, is an emerging issue that has wide reaching health consequences both in terms of health care access and in terms of maintaining the social connections which are so important for mental well-being.

Statistics New Zealand has projected that, by 2061, 26 percent of the New Zealand Population will be aged over 65. Given the Statistics New Zealand Disability Survey finding in 2013 that 59% of over 65 year olds are also disabled it is clear that this population ought to be given significant voice in transport design policies. However, considerations relating to this group remain largely non-existent in our transport system design with the exception of concerns relating to older drivers.

Being disadvantaged in the transport system, physically, geographically or economically, is linked to increasing social exclusion and consequentially to increased morbidity and mortality. Recent research from Monash University has also demonstrated that in addition to the direct link to poorer health, transport disadvantage and social exclusion frequently occur together.

Little is known about the perspective of older people and those with disability on the New Zealand transport system. This presents a barrier to the development of better transport in New Zealand and means new transport projects such as the City Rail link are lacking vital information needed to allow them to best meet the needs of this growing demographic.

Health costs for older people are distributed across hospital and community costs and vary considerably. Costs are closely associated with age, and are dominated by the cost made in the last year of life. A high level of healthcare utilisation is common in the last year in life, but the variation in that use has not been sufficiently described.